MTV's new reality show Jersey Shore is gathering negative attention as it follows the lives of eight "deeply tanned" Italian-Americans youngsters who's out to in a summer getaway. Now, MTV has captured one controversial scene when one of its female cast members named Snookie gets punched in a face by some random guy in a party venue. That clip was shown at the end of tonight's episode and it sure packs a wallop among its viewers because many people are now searching about the said incident. 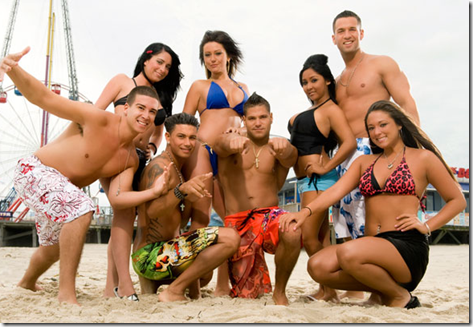 Snookie, or better known with her nickname Snickers, is the small girl with black top in the photo above. Watching the clip, you can virtually see Snookie sprawled on the floor and writhing in pain, while the guy who punched her is being escorted. Oh well, many are indeed intrigued about why that guy punched seemingly sweet Snookie. What drove him to punch a girl in the face? Maybe, many of you will be on the lookout for the next episode of Jersey Shore. Below is a video of Snookie the Jersey Shore girl punched: